It’s not everyday that Bollywood celebrities are stopped from their jetsetting lifestyle, but Jacqueline Fernandez, was stopped at Mumbai Airport by immigration authorities and dispatched back home. The airport security forces were acting on a lookout circular issued by Enforcement Directorate (ED).

Sources from the airport have revealed that the authorities had a sit down with Jacqueline and asked her to appear for all future ED summons promptly. Following this, Jacqueline was allowed to leave the airport and go home. This is possibly because, she reportedly skipped a few recent summons from the ED. According to the lookout issued by the ED, Jacqueline can’t leave the country while the investigation is going on with regards to the Sukesh Chandrashekhar case.

The actress had just returned from the shooting of the film ‘Ram Setu’ in Diu and is to participate in Salman Khan’s Da-bangg tour to be held on December 10 in Riyadh. The actress has been questioned in the Sukesh Chandrashekhar case at least twice by ED officials and Jacqueline has maintained that she is a victim of the conman.

ETimes tried to reach out to Jacqueline’s manager, but we received no response.

Earlier, there were rumours that actress Jacqueline Fernandez was dating conman Sukesh Chandrasekhar. Few pictures of the duo went viral on social media. Sukesh is the conman who was also the prime suspect accused in a Rs 200 crore extortion case. 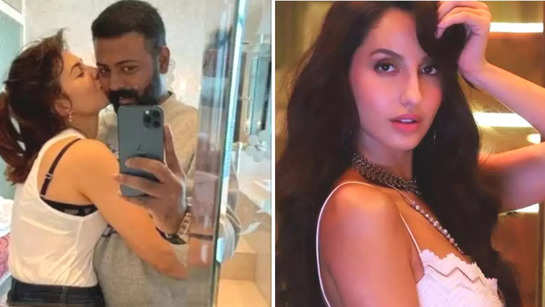 Previously Jacqueline was even questioned for 7 hours, by the Enforcement Directorate (ED) in connection with the Rs 200 crore extortion case involving conman Sukesh Chandrashekhar and his wife, actor Leena Maria Paul.

Responding to the claims, Jacqueline’s spokesperson had earlier issued an official statement saying, “Jacqueline Fernandez is being called to testify as a witness by the ED. She has duly recorded her statements and in future will also be completely co-operating with the agency in the investigations.”

BJP wanted to lure me with money: Bhagwant Mann